Modern communities are trying to figure out how to best balance agricultural needs and environmental needs.

¨There has to be a balance in industry and nature,¨ said Agriculture Advisor Nicole Hoofard.

Hoofard believes that people need to be responsible, as the more people take away from nature, the more they have to find a solution for the new problems the industry causes, particularly pollution.

When an industrial factory moves in, the community surrounding it deteriorates, according to sustainabletable.org. The organization states that factors including, but not limited to, antibiotic resistance of animals, unsanitary conditions of farms, and water pollution caused by manure spills and leaky lagoons can raise health concerns. Harmful water pollutants can cause several ailments including nausea, cramps, and vomiting.   As a result of the health problems that polluted environments cause, the economy also is damaged due to sick days away from school or work, as well as reduction of agricultural crop and commercial forest yields by billions of dollars per year.

However, building factories can be helpful in providing jobs for the unemployed, giving new opportunities to those in need of work. The main issues are how much industry should replace nature and that there has to be health regulations in place.

To help remedy the issue of air pollution, The Mercury and Air Toxics standard prevents large polluters from dumping toxic chemicals into the air, according to nrdc.org. This helps to protect people especially those vulnerable to sickness from pollution such as those who suffer from asthma.

According to the EPA, organic farming, natural landscaping, wild gardening or precision agriculture and sustainable forestry are increasingly helping to conserve nature and ecology and to reverse the negative effects of industries and pollution. 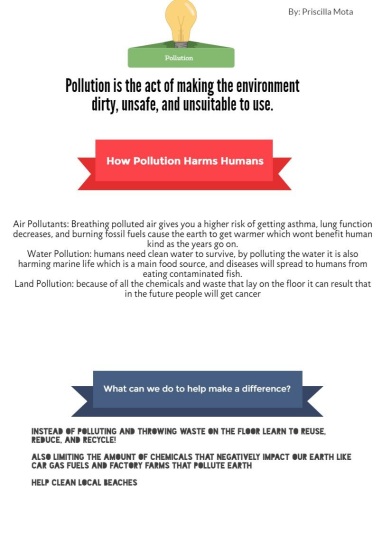 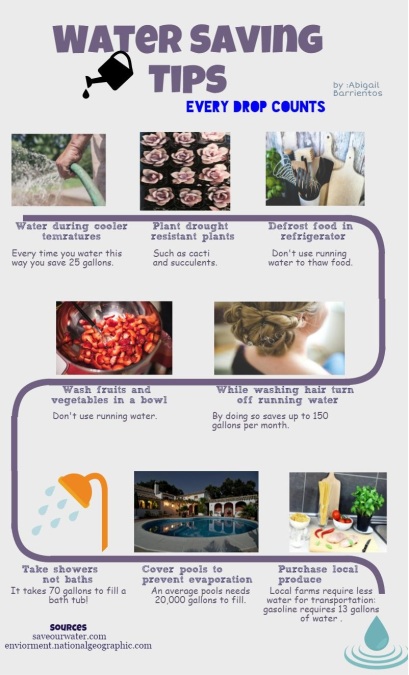 “Wait!” a girl yells at her friend right before taking a bite out of her food.

With social media being right at people’s fingertips it is hard not to get sucked into the world of tweeting, snapchatting, instagramming, blogging and so much more teenagers are offered by the internet. According to CNN.com, we tend to revolve our lives around our “online status” and it affects us one way or another.

Being online all the time and having a public online profile can affect lives and take emotional tolls on anybody.

“Social media affects how much time I spend doing things I should be doing” said Junior, Berenice Mendez.

According to Internetsafety101.org, sharing information online can expose you to ridicule, dangerous situations and cyberbullying. Bullying used to be an in school problem and outside of homes.  Now, through technology, bullying follows people home. Home is supposed to be a safe place but now, technology has injected “opinionated comments” into users’ home lives. Being an anonymou. It has been made it easier for people to be victimized.

“Technology was just developing in my generation whereas students were born into it… they are technology natives.” said AVID teacher Lisa Ireland.

Being bullied makes people feel alone as if they have nobody to talk to or as if they have no voice. Many times it can lead to very serious feelings of constant sadness and even thoughts of suicide. According to stopbullying.gov, someone who experiences bullying are most likely to experience depression, anxiety, increased feelings of sadness and loneliness, changes in sleep and eating, and loss of interest in activities they enjoy. They will disconnect from friends and family preferring to lock themselves away. They won’t want to go anywhere or leave their house.

Even though, most of the people who harass them online will most likely not directly do it in person, victims will feel reluctant to go to school due to the bullying online. According to cyberbullying.org, over 160,000 students stay home every school day due to bullying. If they do not attend school, their grades will drop due to not being in class. According to UCLA psychologists, students who are bullied regularly do substantially worse in school. It’s completely understandable, they are being attacked online while also having the pressure of school. It is stressful, but people have the power to either let social media dictate their life or not let the rude comments bother them and move on. We decide to go online. We decide to sign up for all these media sites, but that’s no excuse for the people who use it as tools to tear down people’s self esteem.

“Social media is like breathing for a young person .. It requires no effort.” said retired history teacher, Clay.

Easy access to social media does not just impact just teens school lives, but relationships with significant others, friends and family. Having phones is having distractions right in their reach. Distractions from special dates, family functions, and hang outs with close friends. According to bustle.com, social media causes relationships to loose the way they connect. Checking phones, even during special time with a special someone has started to become second nature to people. They won’t really be talking to each other just because you’re “connecting” through social media. Social media can arise other problems in relationships. According to pewinternet.org, photos and posts can be used by teens to incite jealousy in others, often former partners, and can lead to jealous feelings for some people.

“[Social media] Allows people to say whatever they want, you must be responsible with it” said math teacher, Vosburg.

Social media also allows people to present themselves in the best way possible. They also did a study where they considered the way significant others present themselves online. 42% agreed that their significant other showed a different side of themselves on social media than they do in person, with 9% agreeing strongly. Nearly six-in-ten (58%) disagreed. People can put anything, say anything and be anyone with just a touch of a finger. With having the world right at your hands you will most likely prefer scrolling down instagram then having a conversation with a family member. According to psychologytoday.com, all the use of video games, texting and social media limits availability to communicate with parents. People rather spend time staring at a screen waiting for a reply of pixelated words then actually talk with someone.

“In my days, it was a lot more personal,” Richard Watkins said. “Social media made this world very impersonal, unaccountable… sometimes you say things over text you wouldn’t say in real life.”

Not just with family, but also with friends. When we message a friend to hangout, people really do want to hangout, but having all the endless possibilities easy at hand it can be difficult to really catch up with the friend. They can end up sitting next to each other just on their phones or computers. That would be really spending time together. If people want to spend time together they can remove their eyes from the screens and talk.

By definition a friendship is, the emotions or conduct of friends; the state of being friends. When people were younger the people they would call friends are the people they would play with on the playground and talk with on a daily basis at school. To be friends means you talk, and you feel a bond with each other. You feel emotions for that other person because you’re accustomed to being around them, talking to them and seeing them. Today, according to theatlantic.com, the term friend has lost its real value as people think the people who friend them on facebook, follow them on instagram or snapchat are there friends even though they might be complete strangers. A friend is someone who is there for somebody when they need a shoulder to cry on, not a person who constantly likes your pictures. That is just a random person you let see your online profile.

Even with all the downsides of social media, there are positives to having it. People are able to connect with family members who live across the country and aren’t able to visit.  Maybe friends, or family members  who went to a college out of state. So many things are possible due to technology. People in need can go to gofundme.com, and fundraise money through promoting on social media sites by asking for donations. There are so many ways for people to use technology for good.

“Social media is beneficial to me because I get paid for what I post and I also get to make people smile with my 15 second videos [on Instagram] and YouTube videos.” Said student Jacob Paulo.

But people decide the way the spend their time online. Also when and where. People’s choices cannot be controlled. People themselves decide to go on social media. Make a choice on how you use it. 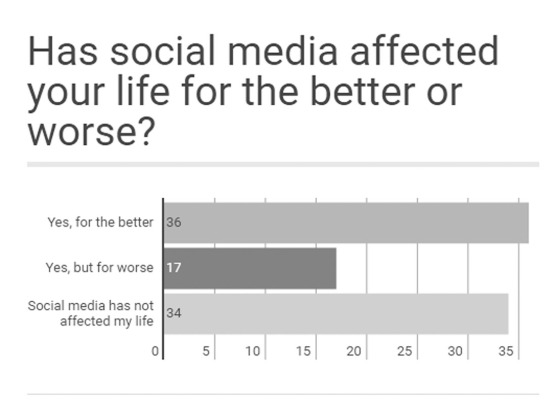